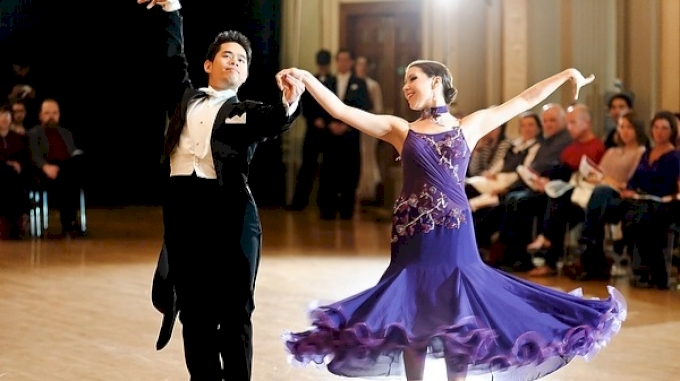 Getting to learn Associate Bronze styling and technique means you have to go through the Bronze One level first. In terms of dancing adequacy, Bronze One represents a mechanical level. At this point your dancing looks mechanical, and feels mechanical.  Typically it takes about four to six months to reach this level.  The biggest variable in how fast you accomplish the different levels depends on how often you come in for classes, how much you attend the group lessons and the practice parties, as well as how much you practice at home.  Just as in everything else in life, what you get out of your lessons depends on what you put into it.

The next dance level within Bronze is the Bronze Two level.  At this level it is also referred to as a technical level or Associate Bronze.  By now you would have been introduced to five patterns per dance.  During this level you now get introduced to (and perfect) most all of your fundamentals in Associate Bronze styling and technique that goes into each dance.

Merengue introduces you to small, flat steps, and nonega motion.

In Mambo you would’ve been introduced to syncopated timing (holding the one beat), flat footwork, small steps, Cuban motion, as well as nonega (double) motion.

In Rumba you would’ve been introduced to small steps, flat footwork, syncopation (holding the two beat), Cuban motion, and hyper-extension of the straight leg taking the motion to your center.  You would have also been introduced to using the arm styling that you should have learned by now from Cha Cha.

In Cha Cha you’d have been introduced to both exhibition arm styling (which does not actually have anything to do with putting on a show), and Cuban arm styling, Cuban and nonega double motion, staccato movements, flat footwork, small steps, and sliding the feet.

Next week we’ll continue to explore the nuances of Associate Bronze styling and technique in the remaining dances: Tango, Samba, Polka, and Disco.